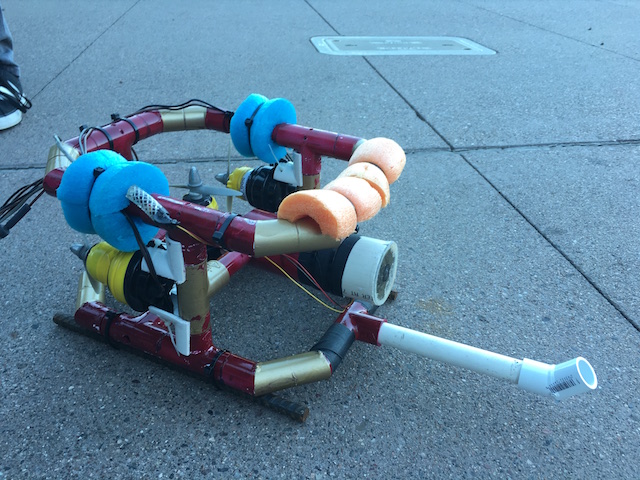 Brovina is our new demonstration robot used for outreach events. She was constructed in fall 2015 and debuted at the September Earth & Space Open House. She is controlled via a simple dual joystick setup, with one for climb/dive and one for forward/backward/left/right. The joysticks are simple switches which take in 12V from the power supply and send it to six digital pins on an Arduino Mega microcontroller. The Arduino then sends a signal to the three speedcontrollers, which send power to the three onboard motors. We use the speed controllers because the microcontroller does not output enough voltage to drive the motors directly. The microcontroller, switches (both through a 5A fuse), the speed controllers (each through a 10A fuse), and the onboard analog camera are powered by a surface-side power supply affectionately dubbed “Big Blue” (or a 12V battery). Big Blue and the monitor for the camera are run off standard 120V AC wall power.